3D Printers; are they as good as you think they are? 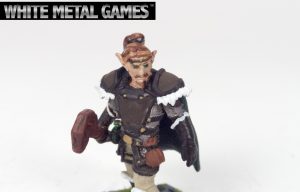 There is no doubt that 3D printers will play a major role in the future of miniature casting technology.  But how soon is that future, and are we approaching it is quickly as many bloggers out there would have you believe?  Recently we were commissioned to paint up a 3D printed RPG figure and the results may surprise you.

It had been a few years since we received a commission on a 3D printed figure I was hopeful the technology had improved a great deal.  The last time we received 3D printed figures was two years ago, back when a local company called ‘Proxy Army’ approached us to paint up some sample models.   That company went belly up after their Kickstarter flopped and I never heard from them again. 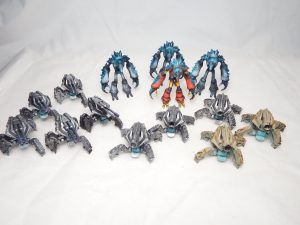 The guys who ran the company were young and eager, but lacking experience.  Their goal was simple:  100% design interchangeability.  They wanted a site where you could design a character, a weapons platform, or a monster in any scale, and have them printed and shipped directly to you.  Certainly this isn’t a new idea . . . 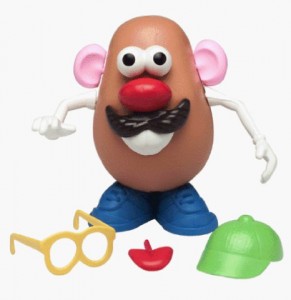 The boast of 3D printing is that you can custom tailor a figure in any way imaginable and it comes out fully printed with NO ASSEMBLY REQUIRED.  Case in point, this is  Taranis, a 3D Printed RPG figure.  First off I will said that the design is incredible, and I was impressed with the 30mm rendering of the figure when I received it. 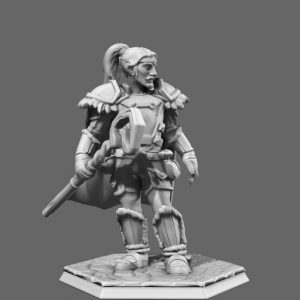 Just imagine a world where I can go to some website and though a drag and drop gallery, create a figure with every detail imaginable, from the drawstrings of his pouch to the scar above his eye. 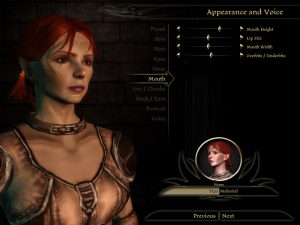 In many ways THIS is the bridge many of us are waiting for between our favorite MMORPG and our favorite RPG!  In so far as I know, that’s just what my client in the case of Taranis did.  This IS HIS CHARACTER in his local RPG, crafted to 100% accuracy.  Minus color of course, which is where I came into the process. 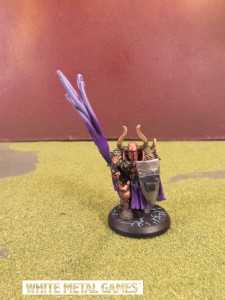 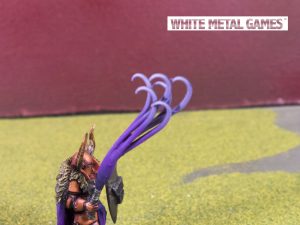 So what are the trade off’s you get when you had a figure 3D printed, rather than having someone like me convert and kit bash your figure like this custom Hedrack (above) we did for a D&D campain last year?

Firstly, and to a lesser extent is brittleness.  When we received the first figures from Proxy army a few years ago, the models were surprisingly brittle, being as they were made from Sandstone.   3D printers can print from a variety of materials,  but every figure I’ve handled so far is made from this same material or something very close to it.  While you can use regular super glue to repair these sorts of figures, plastic glue will ONLY work if the figure was printed from plastic in the beginning, so I guess the rule of thumb here is ask what material the figure will be printed from and use the right glue to repair it when/if it breaks. 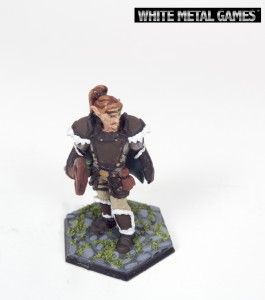 Secondly and to a greater extent is surface texture.  If you look at the attached image, we laid down a thin primer on this figure with an airbrush and this single layer revealed a practiclaly unworkable surface. 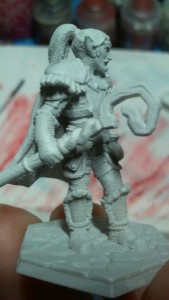 Unfortunately, at the moment, these figures tend to have a very textured, gritty surface, which makes achieving high end results and smooth transitions on these figures practically impossible.  Imagine blending paint, even wet blending, across sandpaper, and you’re in the ballpark. 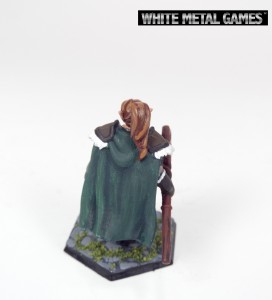 Seen above, this shot of the cloak may look good now, but it took A LOT of paint to get these layers to blend, and certainly I would have been worried about obscuring detail if I wasn’t trying to hide the surface texture anyway. 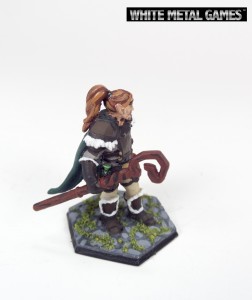 However, some surface textures CAN be printed into the figure.  For example on the staff, the designer printed a few gashes into the wood that I was able to pick out, then then add a few of my own.  Unfortunately, using a wash to pick out these details would not be my suggestion, due to the surface texture.
What this means is that many basic techniques, such as blending, highlighting, and washes are going to be EXTREMELY limited based on the materials this figure is cast from.  As you can see in these sample pictures, the model has practically NO highlights and despite a balanced color palette, is practically without depth in terms of light and dark contrast. 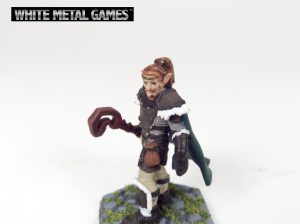 So, in summary, while 3D printing is on the rise, and I am pleased with the way this figure turned out overall, I think we’re still a few years away from seeing 3D printing figures being a serious threat to major miniature manufacturers.

As for me, when it comes to painting RPG figures, IMHO you get your best detail on figures in the following order:

What do you guys think?   I’d love to see some pictures of your 3D printed figures and tell us what you think?

White Metal Games is currently going under a web-redesign.  Come see the progress on our new web page as it develops!

And until next time, this is Caleb reminding you to PUT YOUR MINIS WHERE YOUR MOUTH IS!!!

Find us on the web:

Listen to our podcast on Hobby and Painting:  War Council

Shop in our store: