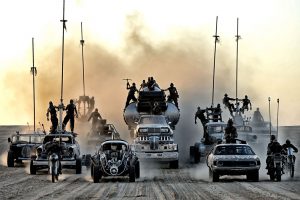 Greetings fellow wargamers!  Caleb with White Metal Games here.  This series of articles will follow the creation of a Mad Max Fury Road themed Orks Warhammer 40k Army.  (Not to be confused with another, similar project we are simultaneously doing, a Mad Max ‘Compilation’ style army, which had a heftier budget and was quite different by the end)

HOW THIS ARMY CAME TO LIFE:  For those that hate backstory, feel free to skip ahead to EXECUTION below

A few years ago, on a lark, I set about building a Necron/Ork fusion army called the Necrorks.  This army was exhaustively covered through a blog article on BOLS here.

Although we had no client at the time, I was eager to cut my teeth on a REALLY big project and show just how far you could push a kitbash/conversion project, cranking it up to 11!  There were many interested parties, and the army sold quickly.  This ended up being a great project for me as a calling card to showcase just what I could do if given the opportunity and an ample budget!

But even with the army sold I didn’t want to stop there.  I had dozens of other ideas for projects and wanted to share these ideas with prospective clients!  So I created a sample listing on Ebay. 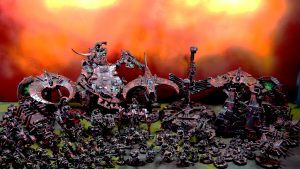 The listing is kind of a generic calling card or placeholder.  It’s intentionally high, so that buyers will open up a dialogue with me before they buy.  There are dozens of ideas on the sample listing, and more to follow on our website in the months to come!

Over the past few months we had multiple inquiries, and through an unusual turn of events, two different clients back to back requested Mad Max Themed Ork armies, although with different budgets and lists but some overall similarities, such as paint scheme.    Which leads us to . . . .

For sake of ease, we are going to refer to this army as MAD MAX-FURY ROAD army.  The client wants more of an emphasis on the latest film in the Mad Max franchise and the army will reflect this more than anything.

That being said, the client requested TONS OF WARBIKES in this army and so the list includes 16 Nobz on warbikes, including a Painboy, two Waagh banners, and a WARBOSS!  Both armies feature an Immortan Joe Warboss character, but for this army he’ll be riding a warbike.  (Yes, we know, in the moving he drives or rides in Big Foot or Gigahorse, but this is a 40k army so we took some liberties!)

The client requested the warbike for Immortan Joe, or Immorkan Joe as I took to calling him, to be BIG, really big, and really stand out.  I started with a old Wartrakk and began to visualize the project.  At first, I imagined using the engine on the back of the bike, using a more modern bike chassis up front, and then swapping the rider for a bigger warboss figure.  That was the original plan.  You can see here the size difference just in the bases between a standard bike base (70x25mm) and the giant (105x70mm) oval base. 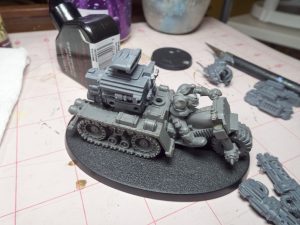 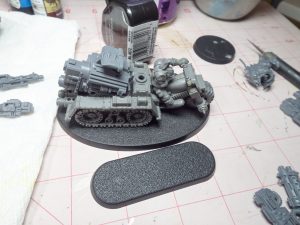 Another idea we had right off the back was giving the warboss an Immortant Joe style skull mask.  We did this by using an skull bead from a craft store that we buy in bulk, carefully tripping it to fit the lower portion of the warboss’ face, and removing his face at the jawline.  A little green stuff work alter and the addition of some hoses and the conversion would be complete. 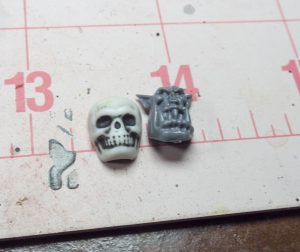 Early on, I realized that I was going to have to ditch the wartrakk chassis.  It was just too cumbersome.  I didn’t want the bike to look like it had training wheels and I didn’t want the warboss to block the engine.  So mostly I harvested the main part of the bike (the fuel tank) but set aside the front wheel (which was too small) and the rear treads for future use.

With those out of the way, I was free to experiment more.  I kept the (trukk) engine and mounted it to the front of the bike instead.  I used and old Imperial Guard Leman Russ tank barrel as a front mount for the wheel (which is from an Ork trukk), added some plastic piping for the rails, and then added a rear section to the bike.  Believe it or not, the rear of the bike is from an plastic toy car I picked up in a CVS.  It’s 1/64 scale, so too small for use as is, but great once you cut it to shreds.  Basically I needed something that would work as a seat for the warbross, and this fit the bill. 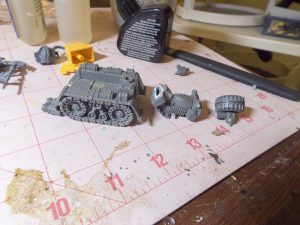 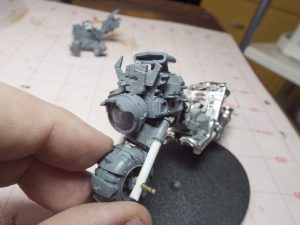 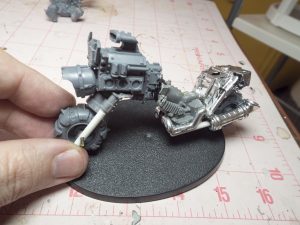 If you haven’t picked up on it yet, this isn’t a ‘how to’ article.  It’s an overview.  I’m going to skip steps from time to time.  This is meant to give you a general impression of my workflow and how I got from A to Z, skipping many letters in between.

Seeing the bike the way it was, I realized the engine was just too big.  It wasn’t giving me the impression I wanted for the warboss and mainly the focus was being taken away from the model in favor of an engine.  That’s not what I wanted.  Interestingly enough, once I removed the bike engine, I was able to just slide the front assembly back a few inches and it all fit very well together.  I added some bits to blend the work together:  the front plate is from a Gorkanaut spare, the handlebars are from a Blood Throne of Khorne, and the front blades are from an army trukk boarding ramp.  Likewise, the other portion of the boarding ramp was used as a mount for the dakkacannon on the bike and it’s ammo crate, which is a cut down from a Battlefield Accessories set, one of my favorite sprues of all time!

The rear bit of plastic is left over from a Mcfarlane toy I cut to pieces some time ago.  I have a bin of debris I use as battlefield scatter when making junk pikes for terrain and rooting through the bin I found this little bit.  Somehow it fit very well and was the perfect mount for a custom Warboss Banner/Boss Pole after sculpting a bit of hair/scalp on the back to blend it all in together. 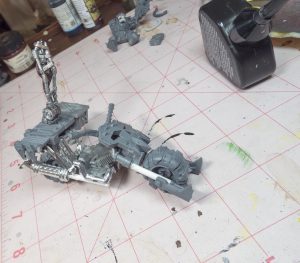 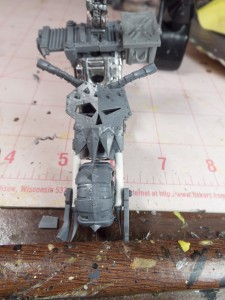 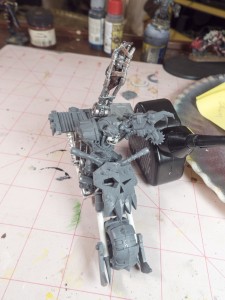 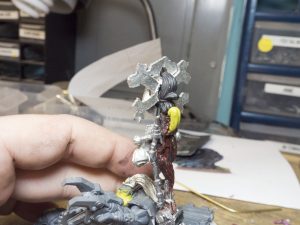 After I figured out the above, mostly the rest of the bike came together very quickly.  I dry fitted the warboss to the bike and after sculpting a custom set on the bike he was permanently mounted to the bike itself.  He got some green stuff work to blend his mask together, and once painted up it’ll be very clear the delineation of where the mask ends and his face begins.  This also allows him to count as a ‘Cybork’ if desired.  It’s worth noting there is no bellow for Immorkan Joe, as there just wasn’t room on the bike to fit it! 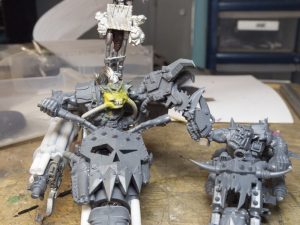 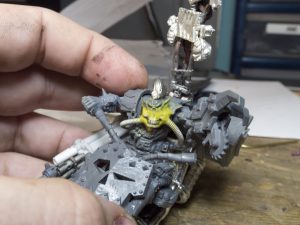 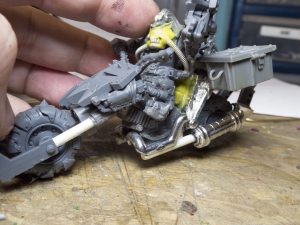 Joe’s right arm is from a Nob Big Choppa, and was custom cut to fit the handlebar.  The cannon is from a Robogear kit, the Werewolf I think, and it’s an amazing kit too!  It yields so many good bits.  Anyway, I used some plastic tubing to create a ton of barrels and then kit bashed some old muzzles on the last few, such as an old pewter Reaper cannon, and a big shoota too! 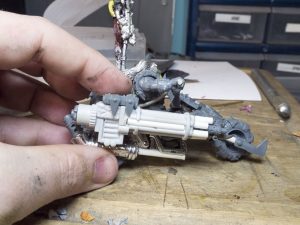 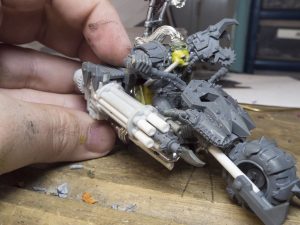 Of notable mention, I used some old Black Ork banners as Waagh banners for the Ork Nobz bikers, and I kit bashed this pain boy using some spares around the shop, including an old IG flamer backpack, and a pewter jackhammer that I long ago bought from somewhere and that I have no idea where anymore.  But in a pinch, it worked very well as a delivery method for these virulent agents pumping out of his backpack! 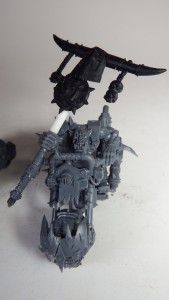 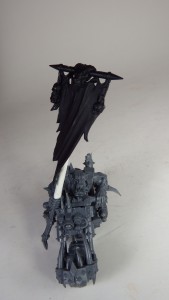 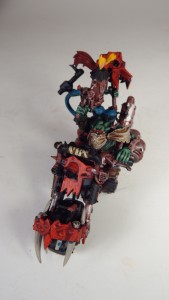 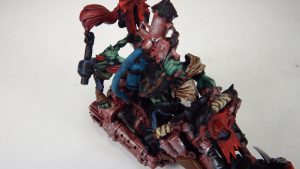 Follow along with this series because in the next article, we’ll tackle BIG FOOT, the monster truck from the Fury Road film and show you how we adapted a simple Gravedigger toy truck into an Ork Monster truck/battlewagon that will crush anyone crazy enough to risk death or glory!

White Metal Games is currently going under a web-redesign.  Come see the progress on our new web page as it develops!

And until next time, this is Caleb reminding you to PUT YOUR MINIS WHERE YOUR MOUTH IS!!!

Find us on the web:

Listen to our podcast on Hobby and Painting:  War Council

Shop in our store: