To really make your model stand out, let us add Light-Emitting Diodes (LEDs) or Optical fiber! 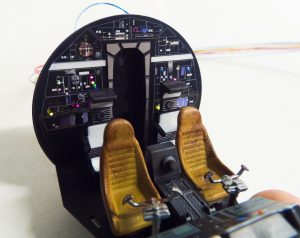 Optical fibers, on the other hand, are flexible, transparent fibers that allow light to be transmitted between their ends and travel down their length.

In general, these models must be assembled new by our assemblers (and, of course, be hollow) to take advantage of this service.

LEDs provide the light source, while optical fibers are used to control the light output of an LED and create a desired outcome; such as twinkling lights in a ship cockpit, or many small lights divided from the same LED. Think of it like holding a flashlight up to the end of a bunch of bendy straws . . . the flashlight is the LED and the straws are the optical fibers. 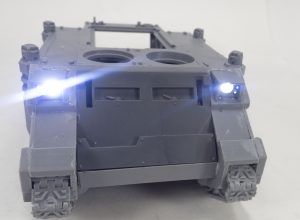 Installing a basic LED is $25 each. This includes the cost of all materials and labor to install (switch, battery, wiring, LED bulbs, etc.). However, the more you buy, the more you save!

LED installation is on a case by case basis. These prices should be considered an ESTIMATE ONLY. Not every model will be a good candidate for LEDs. Due to physical space constraints, some model areas may be impractical to light (such as small gun barrels, etc.), require additional time to wire, separate batteries, additional switches, etc.

In addition to the below suggestions, LEDs are perfect for Titans, Terrain, and many monsters with object source lighting; such as fire breathing dragons, plasma belching aliens, and bio-luminescence! 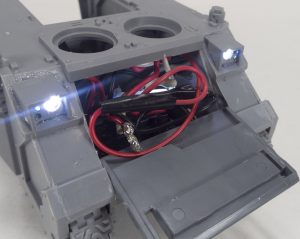 All components (battery, wires, etc) will be internalized with the exception of the switch itself, which will generally be situated on the outside of the model in a discreet location (such as beneath it).

The battery MUST BE ACCESSIBLE; whether that mean by a fly away panel, internal compartment, hatch, or the like. In some cases, the battery or switch can be disguised, such as wreckage on a base or power couplings or the like, but this is on a case by case basis.

For even more savings, here are a few pre-built LED ‘packages’ you can take advantage of for your lighting needs.

For even more fun, consider a specialty bulb, such as these listed below. These are priced as an additional charge per LED.

Many of these bulbs require an independent power source, and so using MORE THAN ONE of these on a vehicle smaller than a superheavy is impractical at best and usually impossible. Contact Us if you have any questions.

For you wargamers that like to be able to remove ‘damaged or inoperable’ weapons during games, we offer Detachable LED Weapons.

This upgrade costs an extra $15 per weapon, but allows you to remove a magnetized weapon as normal. This cost DOES NOT including fees for magnetization.

From time to time, we offer incentives such as extra bulbs, upgrades to certain packages, etc.

For you DIYers, we recommend modeltrainsoftware.com for all your LED needs!