Adeptus Titanicus: Stripping The Void Shields On Your Wallet

Originally released in 1988, Games-Workshop brought Adeptus Titanicus back to its fans at the end of 2018 in the form of a new gaming system, Adeptus Titanicus: The Horus Heresy. The delight of grizzled gamers everywhere rattled their dusty Epic scale models in storage lockers everywhere. I was only a few years old when the predecessor of Epic came into existence, so Adeptus Titanicus circa 2018 was not on my radar. I finally stumbled upon the system from an online preview and creeped on the miniatures, but one look at the prices had me aborting any thoughts of playing the game.

Fast forward to April 2019 at my groups bi-monthly game night. Lucky me, I was the only person to show up…aside from our host Dan. After twiddling our thumbs for about an hour and shooting the grim dark breeze, Dan had the idea to introduce me to his newest passion: Adeptus Titanicus! Thankfully, Dan diverted his energy normally dedicated to the Horus Heresy (30k) into Titanicus and provided two fully painted Legios to battle. We played a game with basic rules with mirror match god-engines; 1 Warlord, 1 Reaver, and 1 Warhound. It wasn’t until that night that I realized I’ve always subconsciously wanted to command an agile Warhound Titan into flanking maneuvers to kill its larger cousin machines. Each machine had its own strengths and weaknesses that a skilled Princeps could field to out maneuver, outgun, or survive engagements. Our battle ended with both of our Warlords hammering away at each other as they closed the distance. My engine fought off his striding Titan while immobilized and was able to destroy the machine from afar before it approached close enough to cause mortal damage from its detonating plasma reactor.

The best aspects of gameplay remind me of a mix of Warhammer 40k (old and new), Necromunda, and Kill Team. Blast and flame templates are back for those old school 40k players that have missed them since 7th edition. Players roll off at the start of each battle round to compete for the initiative. The command consoles for each titan makes the player question every decision in regard to their reactors and adds a wildcard factor with the possibility of the machine spirit taking control. Each hot reactor has the chance to cause self inflicted damage tying into each titan’s death becoming as cinematic as a Final Fantasy cut scene. The game is played on a 4’x4’ table and can increase with larger battles. A 1500 – 2000 point game plays well on such a board as you’ll typically have around half a dozen god engines striding around that point threshold. The free space is utilized though with command consoles as they tend to take up a large portion of room; requiring expert organization skills and all of the required accessories.

The biggest obstacle of the game is the initial cost of getting started. I highly recommend playing an introduction game with a friend or at your FLGS so you can get a feel for the game mechanics and see which Titans or Legio fit your playstyle. Typically, getting a Titan Battlegroup and the Ruleset is the best bundle with the total buy-in being $230.00 before tax or applicable discounts. This option offers you 1 Warlord, 1 Reaver, and 2 Warhounds plus all the necessary rules, cards, consoles, and assets at your disposal. All you would need to supplement your game would be terrain and a board. The Titan Battlegroup is a rare commodity nowadays as it is no longer in production since its first run, so if you see one at your local store snatch it up before it disappears to another Princep’s hobby bench. The newest option would be to purchase the Knight Household Battleforce for $130 instead, but this would be better as an supplemental purchase after testing your mettle with Titans and Knights alike. Another option would be to split a Grandmaster Edition box set ($290.00) with a friend in order for each of you to get 1 Warlord, a trio of Knights, the ruleset with a set of extra dice, and terrain. The lingering issue would be having to purchase another rulebook if sharing was not an option. If the Grandmaster Edition was the way you were leaning, you could get a reasonable buy in value of $145.00, but your models would lack the versatility compared to the Titan Battlegroup in your ability to utilize mantiples and diversify weapons.

Former obstacles to be aware of were the fact that a lot of accessories are not offered or available for purchase until recently. For example; Titanicus specific dice could only be purchased via a ruleset ($60.00) or a Grandmaster Edition box ($290.00), carapace weapons for Warlords and Reavers were extremely limited in what was offered (apocalypse missiles or turbo laser destroyers), knights came with one of each ranged weapon and did not include missile pods, FW Warlord quake cannons and macro-gatling blaster were extremely challenging to purchase since they were always out of stock in minutes. With the rising popularity of the game though, GW has corrected these grievances for the community by releasing products to end these community hindrances.

After you play your initiation game and decide to go full stride with Adeptus Titanicus; start slow and wait for the options and kits to improve to expand the game to its full potential. I hope you see you on the battlefield Princeps!

White Metal Games is a miniature painting commission service based out of Knightdale, North Carolina.  They specialize in producing custom models for any range including wargames (i.e. Warhammer 40k), board games, roleplaying games, historical figures, and display dioramas.

If you are interested in expanding your Adeptus Titanicus forces: these Cerastus Knights are available for purchase or if you’re looking for a center piece for your next Apocalypse battle, our 40k scale Forge World Warlord Titan is armed and eager for battle. 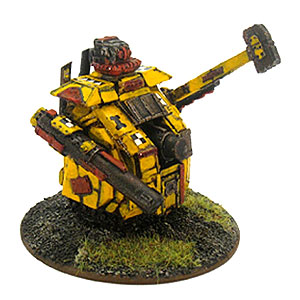